Kumusta? and other Filipino greetings

After talking about greetings around the world with our friends in PocketCultures, I would like to give a more detailed answer to this question: 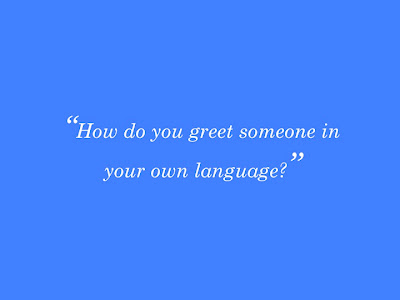 The first thing one needs to know about language in the Philippines is that we have lots of them. We’re an archipelago of different cultural communities with various languages and dialects (not to mention foreign influences that enriched our languages). English is widely spoken here and we also have the vernacular Filipino with Tagalog as its base. Up to this day, this has become an issue to some who belong in other ethno-linguistic groups. It deserves a separate post.

Going back to the question, many Filipinos greet friends/loved ones/anyone in the vernacular with the word ‘maganda‘ to describe each part of the day. In its literal sense, ‘maganda‘ means ‘beautiful’ and I’ll be using it for this post.

Two combined letters (‘ng‘) are attached after ‘maganda‘ to become an adjective. 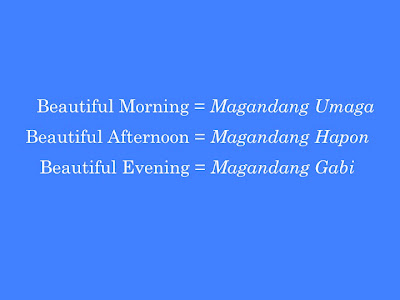 It’s not really “Good Morning/Afternoon/Evening”. It’s more than that. It’s a “Beautiful Day” or “Magandang Araw” to accurately describe what’s ahead for you and me. Sadly, something gets lost in translation.

There’s also “Magandang Tanghali” for noontime, which probably has no direct translation in English. This may have something to do with the time of the day in taking meals (breakfast in the morning; lunch at noon; snacks in the afternoon; dinner in the evening). We just love to eat.

Then it’s followed by something borrowed from the Spanish, “Kumusta?” (from como estas).

If one would talk to younger/trendy folk, one will probably get an answer like “Okay naman.” Notice that it’s a mixture of English and Filipino.

Below are some rough rules on physical contact (applicable most of the time but not all the time). Take note that this is the conservative approach to make sure that you won’t be in trouble. 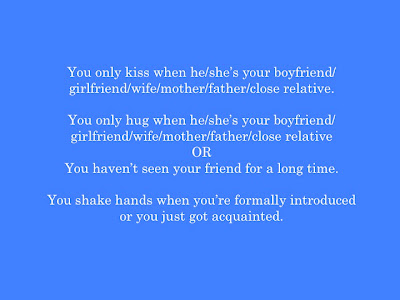 The rules above are conservative in nature but times are changing. A kiss on the cheek is common while a kiss on the lips is reserved for lovers.

There’s also the customary beso-beso (placing one’s cheek to the other or air kisses as my wife told me) between women in some circles. Between men and women, this has been adopted over time but beso-beso between men in the Philippines is a no-no. A firm handshake would do just fine.

The explanation behind this is quite simple: it’s just not ‘manly’ for most Filipino men. Macho, right?

Speech and body language are important things to take note when one talks to Filipinos. I think this deserves a different post but one tip to know if the greeting is sincere is when it is complemented with a warm smile from your Filipino friend.

Read more:
Kiss, hug or shake hands? Greeting people around the world
How now Carabao: a special animal in the Philippines
Mabuhay! Meet Bryan and discover the Philippines

You can read a lot of writing lamenting the influx of Americanisms into UK English. “Can I […]

9 comments for “Kumusta? and other Filipino greetings”