The easiest way to know a country better is by looking at the meaning of its flag.

On June 12, my country will celebrate its 112th year of independence.

Shared Struggle, Shared Design
If placed beside each other, one would see the similarity between the Philippine national flag and the Cuban national flag. 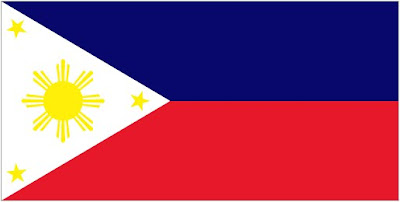 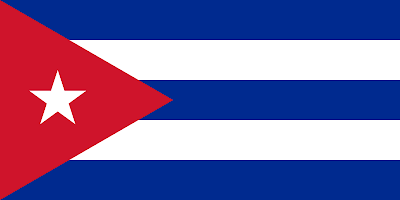 The Philippine and Cuban National Flags. Images from Wikipedia.

It’s no coincidence: both countries were colonies of the Spanish Empire and both fought at the turn of the 19th Century. The Filipino revolutionaries of 1896 were inspired by the independence movement of Cuba with the poet José Martí (some of his verses made it to that famous song ‘Guantanamera’) at the forefront.

The white equilateral triangle stands for equality and fraternity. The blue stripe means peace, truth and justice while the red stripe represents the Filipino’s patriotism and valor.

The Philippine flag has changed its meaning through the years. The descriptions provided above are officially accepted.

To the East
There have been earlier interpretations of the flag particularly from Mariano Ponce, a Filipino patriot, who wrote in 1899:

The blue color of the sky, means our hope in a future prosperity, through progress; the red means the blood with which we bought our independence; the white represents peace which we wish for ours and foreign countries.

The sun represents progress, and sometimes means that the Philippine nation belongs to Oriental family, like Japan, Korea, etc. who bear also one sun in their flags.

The three stars are the three great groups of islands composing the Archipelago, the Luzon group, the Bisayas group and the Mindanao group.

—from Mabini’s Ghost by Ambeth Ocampo

Who is Mariano Ponce? 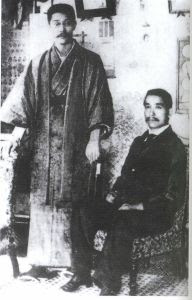 Guess who? Image from the Center of Souteast Asian Studies Kyoto University site.

He’s the person wearing a kimono. Seated beside him is a guy named Sun Yat-sen, the Father of Chinese nationalism. Both were arms smugglers for their respective countries (!)

Under the Shades of Red & Blue
Our flag has a special feature. If the red field is above the blue field, it means the Philippines is in a state of war. 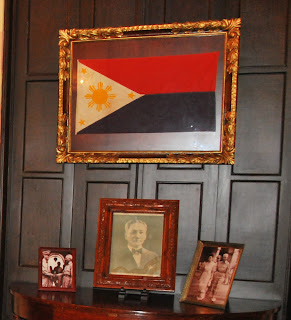 This flag was used in World War II. Photo by Luisito Tayag.

Believing that the Filipinos were not yet ready to be independent and due to expansionist motives, the United States took possession of the islands for almost 50 years. This was briefly interrupted when the Japanese started their invasion in 1941. Philippine independence was later recognized by the U.S. Government on July 4, 1946.

It is interesting to note that July 4 is also the independence day of the United States. This was changed in the 1960s to June 12, the day when President Emilio Aguinaldo declared the independence of the Filipinos and the birth of the Philippine Republic.

East + West
Some people tried to classify Filipinos, asking if we belong to the Eastern or the Western sphere. The question is often asked to identify the roots of our problem as a people. Each time that I’m asked this question, I say that we’re a mix of both worlds.

We have picked up both the good and the bad from the people who conquered us and now that we are independent, it’s just time to distinguish from these influences, come up with something new that we can truly call ours, and get the best from our history.

Read more:
Mabuhay! Introducing the Philippines
Maramures – ‘Romania’s Celts’
What do you really like about your country?

6 comments for “Of Flags & Meaning”