A dog is recognized as everybody’s best friend. They’re loved almost all over the world. In my country, dogs are met with the same affection but they also face stiff competition against our beloved carabao.

Wow Carabao! This is our best friend.

Filipinos see carabaos as faithful partners in life. The carabao or kalabaw is a water buffalo that is endemic in Southeast Asia. Aside from helping our farmers plow the fields, this animal is our source of transportation, milk for sweets and cooking, meat, raw materials to design furniture, coin and mascot designs, body armor, children’s songs, jokes, and expressions in the vernacular.

The Carabao and I, Taken last year in Batanes, the northernmost part of the Philippines.

The carabao has been our constant companion and it has taken a great role in shaping my country’s history. During the Spanish colonial period, the natives worked on the fields to produce quantities of rice, sugar, and other cash crops that were exported throughout the 19th century.

The farmers would have to rely on the carabao’s hard work and patience to get the job done. Profits from this trade eventually gave rise to rich and educated Filipinos who earned the alarm, envy, and scorn of the friars: bestias cargadas de oro (beasts laden with gold) 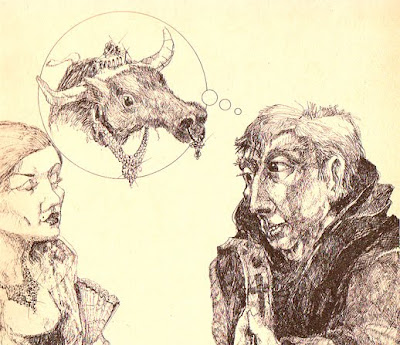 Look at His Eyes. Taken from The History of the Burgis by Mariel N. Francisco and Fe Maria C. Arriola

The friars were a powerful bloc that maintained stability and continuity of Spanish authority in the Philippines for more than 300 years. For good or bad, these men of the cloth brought us the craft of masonry, the art of architecture, the weaving industry in northern provinces, the propagation of coffee in a province called Batangas, and most importantly, Christianity. Filipinos at present are more than 80% Roman Catholic.

That is not to say that abuses were not committed. There were numerous revolts but the successful and most enduring one was the revolution in 1896. Filipinos almost had complete victory in driving out the Spaniards but our leaders placed too much trust and faith on the Americans.

In 1898, the Philippines was sold by Spain to the United States for $20 million. This was not well received by the Filipinos because they thought that the Americans would recognize their independence. The following year, the War for Philippine Independence erupted. The revolutionaries didn’t have enough arms and sophisticated weapons. They had to rely on anything available and would also need the help of their faithful and furry compatriots. 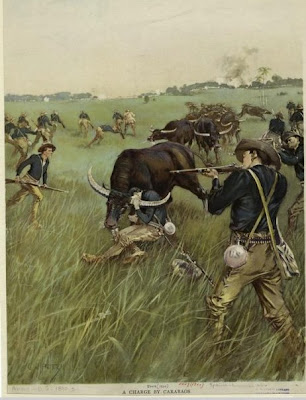 A Charge of Carabaos. This postcard was sourced from Ambeth Ocampo, one of our leading historians.

Due to in-fighting among our leaders and lack of arms to match up against the new invader, we lost that war. More than 200,000 innocent civilians died and one of the biggest casualties was the carabao. A tenth of the total population of these animals before the war was eradicated.

Today, most Filipinos speak English and we use it as a medium of instruction. Our form of government is patterned after the United States. Santa Claus, Superman, Ironman, Batman, hamburgers, sanitation and vaccination are just a few of the many things we attribute to the Americans.

As a people, we have evolved and so has our use of English in popular culture, which we call Carabao English. It’s now part of our vocabulary and we use it every day unwittingly or not.

One of the many examples is the expression: the more, the many-er (it should be: the more, the merrier). The mistake was deliberate to elicit laughter, catch one’s attention, and go light on things during the day.

There’s also a figure of speech, blessing in disguise. Instead we use, blessing in the sky and I think that it just applies to the carabao, our inheritance from the Great Creator.

I say, take a bow carabao for you have earned a special place in every Filipino heart.

Read more:
Mabuhay! Greetings from the Philippines
‘The awful German language’: so you want to learn German
The Argentinian Gaucho

21 comments for “How Now Carabao”