For most people, the 17th of March every year marks the one day when everyone can become Irish. And rightly so: wherever there’s an Irish pub in this world, may this be Macao, Cancun or even Reykjavik, you’ll get the chance to sip at a Guinness and try your singing skills at the “Irish Rover” and (of course) “Whiskey in the Jar“. 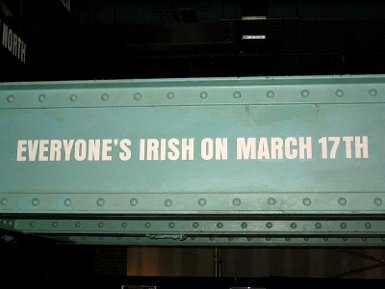 And how to celebrate St. Patrick’s day? You will at least need to wear something green. And there are also many parades to attend, of which the most famous ones are (obviously) in Ireland. But please be aware that you’ll only see the colourful floats and marching bands in bigger cities like Dublin and Belfast – if you should attend a Paddy’s Day parade in a rural town it’s more likely that you’ll see the local fire brigade, the Garda (Irish police) and many tractors parading down main street. And there are loads of events around the parade – this year the Guinness Brewery is offering free admission if your name is Patrick or Patricia, for example.

Besides the parades in Ireland there are many other festivities worldwide, especially in countries with large Irish communities like the US and Argentina – you’ll find a (incomplete) list here.

But who was the man in whose honour this day is held? Allegedly born in Wales in the 5th century, he became the Christian saviour and main force behind the Christianisation of the island. Oh, and he explained the Holy Trinity by means of a shamrock (hence creating Irelands national symbol) and expelled all the snakes (as symbols of evil) from Ireland.

So after his canonisation the 17th of March became the one day to celebrate Paddy, and with him all of Ireland’s culture. So, raise your glass and say “sláinte” with the Irish – which luckily on March 17th is the whole world.